Martin Weller’s book The Battle for Open: How openness won and why it doesn’t feel like victory (2014) was under scrutiny in my last blogpost. In his book Weller discusses two reasons why openness matters in education today:

Weller addresses the impact these two reasons have on higher education today and focuses especially on the institutional level of openness in higher education, but he also turns to the individual level of openness looking at how individual educators and academics are adapting their own scholarly practices by adopting open and digital approaches. And when focusing on open scholarship, Weller sets off with a quote:

(1) open access and open publishing, (2) open education, including open educational resources and open teaching, and (3) networked participation, concluding that open scholarship is a set of phenomena and practices surrounding scholars’ uses of digital and networked technologies underpinned by certain grounding assumptions regarding openness and democratization of knowledge creation and dissemination. (Weller 2014:136)

Weller narrows this definition down to three issues relating to open scholarship to delve into in his book:

Martin Weller is but one discussing open scholarship these days. And in a blogpost Suzan Koseoglu takes a critical stance at the idea of true openness and opposes to the thought that openness is  only to be understood as the combination of ‘digital’, ‘networked’ and ‘open’.  Koseoglu addresses Steve Wheeler along with Veletsianos and Kimmons and comments that openness is inherent to education: openness and sharing are to be seen as general characteristics of education as such. 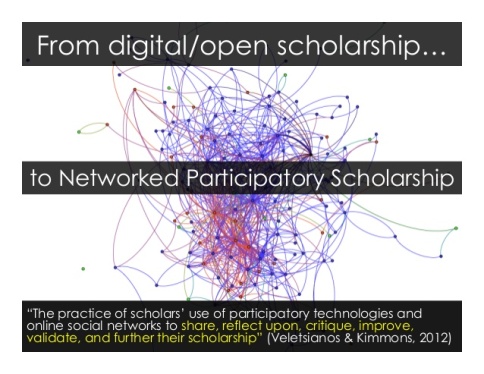 For me, open scholarship is a state of mind – it is a choise each educator needs to make as to how open they wish to be, along an entire spectrum of scholarly activities. Some educators are closed in the sharing of their content but are open to collaboration with other educators. But true openness is where content is shared freely, all work attributed fairly, and where educators also open themselves up for dialogue, collaboration and constructive criticism. (Steve Wheeler: Open scholarship.)

So the idea of ‘networked participation’ – which Veletsianos and Kimmons, Weller and Wheeler all agree on as a way to promote openness in all aspects of education and thus promoting open scholarship – is being questioned, but maybe not as much as a possibility to engage in dialogue, collaboration and constructive criticism as an idea connected with normative expectations of what it is to be an open educator and scholar today:  “Openness should be a worldview for an educator more than a technological possibility”, says Koseoglu. To her open scholarship doesn’t necessarily require access to technology and basic digital literacies as a prerequisite for practice. To Veletsianos and Kimmons, Weller and Wheeler they are inevitable.

Weller, Martin (2014): The Battle for Open: How openness won and why it doesn’t feel like victory. London: Ubiquity Press